This is a follow-up piece to part I of this series regarding my personal journey that many have found to be extremely helpful in making connections to their own past trauma history. Since my first posting I have continued to make other deeper connections as to how current life circumstances are connected in the most fascinating and convoluted of ways to a past history of adverse or traumatic events. Isn’t that the way it is with healing our traumatic past? A domino effect that occurs that begins to connect all the dots and make perfect sense of who we are and why. When we are ready, the answer emerge from within a sacred and often hidden place.

One theme that was unveiled in this deep personal peeling of layers involved men in the military. But I suspected that the unpeeling of this onion had earlier connections, more than just recent adult events from age 34. It’s been my experience working with thousands of clients that somewhere between 0-6 years old lie the roots of these recurring themes. These themes may not take on the exact circumstances of what happened in early childhood but the beliefs and decisions formed are what typically get repeated. The traumatic events (both big and small) have a lasting impression for the rest of our lives and I have yet to meet anyone who’s granted me permission to look for those connections in an EFT/Matrix Reimprinting session that wasn’t completely astonished by what we’ve uncovered.

I contemplated what that link was for me in early childhood. What possible events somehow connected the dots to the military, to violence and snipers? Some early scary experiences emerged in my mind, not as terrifying memories, but showing up to me in a kind of dissociated “oh isn’t that interesting” sort of way. For me these are always worth exploring when they appear, even if my left-brain chimes in with doubt about its significance. It’s so easy to deny something from ones past as being non-traumatic thorough a set of adult eyes. This is a perfect example of what we teach when we train our EFT students regarding something called the “dissociation capsule” or often referred to as the “trauma capsule”. The specifics of any traumatic memory get compressed, details left out, memory traces buried.

When you choose to work on early life experiences, often they are just hints of a memory, like thinking about photos in a family album. There is a thread of recall, but not a full recollection of what actually occurred. These kinds of events I often am not fully aware of in detail, I just remember flashes of scenes. So my best approach when I do decide to work on them to heal and integrate them more fully is to use the “make It up EFT technique” and Matrix Reimprinting, which allow me to use my imagination about “what may have likely happened.” These approaches are very helpful in producing some interesting results. 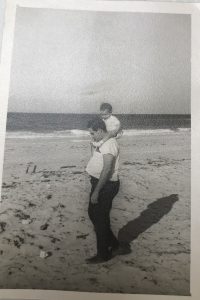 Early childhood in Cuba on the beach with my father

What emerged was one possible early memory that may have laid the seeds for this curious thread of life events. I was born in Havana, Cuba in 1965. In July 1959 Castro had seized power in a coup. Early on in his rule it became clear that he was not the liberator the people thought he would be. His government ruled by force led by a charismatic authoritarian dictator. The Cuban military along with the Russian soldiers who arrived there soon afterwards, always wore military uniforms and openly carried large guns. Until his recent death, Fidel Castro wore his signature military uniform everywhere he went.  My family had many traumatic events around this time, including having our homes and business taken from us, becoming newly acquired property of the state. When we arrived at the airport to leave the country in August of 1968 we weren’t allowed to take anything except the clothing on our backs. Even if I for some reason I wasn’t triggered by a lot of men in military uniforms those first years of my life, my parents were and the energetic link between children and parents is incredibly strong (some say that small children and parents share the same energy system) until age 3 when it should individuate altogether by age 6.

The second trauma seed I remembered recently was that when we boarded that plane from Cuba to the U.S., we were forced to leave my father behind. As was the law, all men of military age were forced to work in a hard labor camp before they could leave the country and my father was called to serve his time when my mother and I received our permission to leave. In a few weeks I will be celebrating the 50th year of my arrival in this country. Anniversaries of significantly emotional events are often peak times for feeling unprocessed pain and more often than not the dates of these trauma anniversaries are beyond our conscious awareness. Last week I was deeply affected by what’s been happening at the Mexican-U.S. border. After taking time to ask what my personal connection to that was it became clear that my own experience of being separated from my father is why. 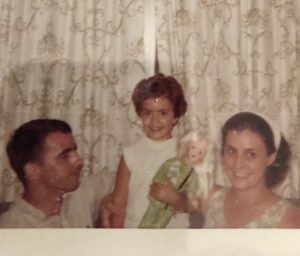 My father’s brother, my uncle, had meanwhile been living in the States since he was a boy. My uncle had been drafted into the army during the time of the Vietnam War. When my mother and I arrived in Miami, my uncle got the news at his Army base in South Carolina that my mother and I had landed. He risked being reprimanded at the very least by sneaking off base and taking a Greyhound to Miami. I was 3 years old at the time. In all the bewilderment of leaving the only country I had known, being separated from my father, and suddenly having a man I had never seen greet me in a military uniform and act incredibly familiarly me was very upsetting. Even though he later gave me this doll my reaction was to become despondent. The smile you see here might have been covering up the fact that I was scared, according to my grandmother. Girls especially are conditioned to be “nice” and aside from fight/flight/freeze they can also use the survival strategy of “tend and befriend”. The way my family tells this story I was convinced that this stranger was suddenly taking my father’s place.

So as my journey deepens, I see ever more clearly in ways I had never imagined were impactful, my personal connection to the military. How even just a few instances, when experienced as a young person with a developing brain, can be profoundly impacted in ways that can shape the course of a lifetime.

I’m looking forward to seeing what happens when I address these. Thank you all for commenting on the original post. I’ve heard from many people who had to read it several times to really understand all the synchronicities I wrote about. Fact is indeed stranger than fiction.

Recommendations for exploring reoccurring themes in your life:

Write down all the significant events that happened to you between your mother’s pregnancy and when you turned 6 or 7. These should include things like moves, deaths, financial loss, change of schools or caregivers, births of siblings, illnesses, and of course any ACEs.

Write down the major patterns you see in your life such as I’ve moved 30 times as an adult, or I can’t seem to hold a job, or something always happens to my savings, or I’ve been abandoned by every man I’ve had a romantic relationship with or … Connect the dots between those events above and your patterns. Use a skilled EFT or Matrix Reimprinting practitioner to assist you if you don’t see it or if you need guidance because it’s too charged or multifaceted for you to deal with on your own.

Bring out old photos of yourself in early childhood or ask your family to tell you stories about you that they can remember and connect with that child using Matrix Reimprinting to ask them what they are experiencing then heal what needs to be healed or glean the wisdom that this part of you has to give you now.