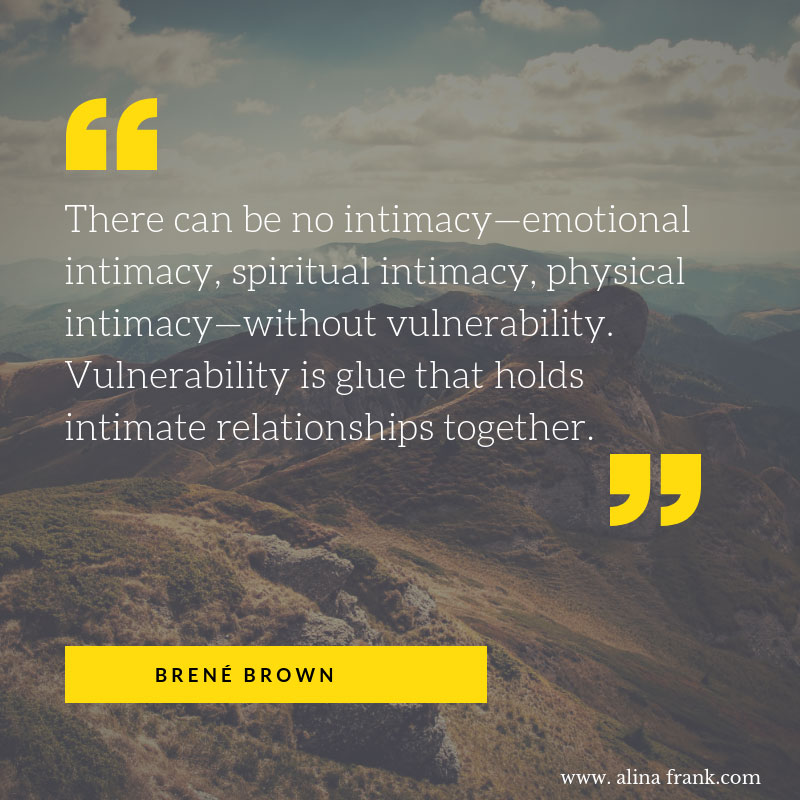 “Oh God, what have I done?” is a common sentiment that can be experienced when you’re going through a “vulnerability hangover”. That wonderfully evocative phrase was coined by renown shame-researcher and gone-viral TED Talk presenter, Brene Brown. A vulnerability hangover is defined as how you feel during the time after you’ve put yourself out there in some big way but aren’t sure yet of the response you’ll receive, or how it will be perceived by others. For some, that might be having a difficult conversation, or telling the world that you were harmed or that you are somehow different, or maybe you are announcing a major change in your life. In the last 10 years I’ve had several opportunities to stick my neck out this way, including letting my family and world know that I was getting divorced after 17 years (a marriage that most perceived as a decent marriage), coming out by writing a book on sexual healing (How to Want Sex Again), and by publicly calling out some unethical actions by bad apples in the tapping profession. I wouldn’t have had the courage to do any of those things had I not had EFT.

Where do we learn not to be authentic, to mask who we really are, and to shun being courageous for perceived safety? The answer is, by those who shaped our beliefs and then we imprinted them in our early childhood. Many of us can recall instances when our parents acted one way in public and very differently in private. I recall a story someone told me about a parent who ran a home-based business. One minute their parent would be yelling to the point that spit would be shooting across the room and the second the phone would ring and they would then calmly answer, “Hello, thank you for calling the offices of ___, how can I help you today?” What do you think was the lesson learned by the child observing such a flip flop of behavior?

I invite you to think about all the times you’ve been hurt or made to feel ashamed, simply because you were being yourself in childhood. The beliefs you may have gained from such memories could include that vulnerability equals weakness or it’s dangerous to speak up and share your truth or any variation of those. This will make a rich list to use EFT and/or Matrix Reimprinting on!

Here are a few experiences of vulnerability hangover from my clients:

Sarah is a well-known personal fitness guru making a seven-figure income. One day after months of doing EFT with me regarding her struggles with hitting business goals, she realized that one of her subconscious secondary gains was her carefully hidden eating disorder. To the world she was fit because of her fitness programs but internally she knew that her behavior around eating was making her ill. She had just hit a place on her healing journey where lying for one more day felt like selling her soul to the devil. Sarah ended up writing an article about the pressures of social media and her own secrets that gained her lots of respect.

Rebekkah is a religious woman who came to work with me on her anger. She was feeling tremendous guilt that she was angry all the time. This would often come out as impatience with her children, yelling at her husband, and blaming other religions as well as secular society for the ongoing sense of danger and lack of security in her country. Our work peeled away layer after layer of indignation and hurt. After eight hours of tapping sessions together, she had a major revelation that she was very angry at herself because she had, in her words, “failed to report childhood sexual abuse” to authorities both within and outside her religious community. Tapping not only helped her to transform her relationships but enabled her to finally speak up.

Both these women experienced vulnerability hangovers at different phases from the moment they told me to the events to when they told others in their circles and finally to the release of information to the larger community. Both took ages (by EFT standards) to get to a place where they felt compelled to do “the right thing”. In my own life, some of these moments took years to get to! Some of the physical repercussions of such raw vulnerability I’ve seen include headaches, stomach aches, skin condition flareups, muscle/joint aches and insomnia. The emotional aftermath can often be felt as regret, panic, anxiety, and extreme fatigue.

Here are some other ways to get through the intensity of a vulnerability hangover:

Find a trusted friend, practitioner, or family member who you know will be supportive and share what you are about to do or say. Tap on your fears of what they might say or not say.

Figure out what your go-to resources are. For one person it’s making sure they eat right, for another it’s refraining from alcohol, for another it’s going for walks in nature or spending time meditating. Use EFT for any resistance you feel to setting boundaries or cutting back on other commitments so you can take care of yourself first.

Come up with your worst-case scenarios/repercussions and tap on them. Often, they can sound completely illogical but can grow and intensify if not brought up to the light of an EFT setup statement.

Know that you might experience regret so make sure you have ways of reminding yourself to use EFT regularly throughout this period.

Use Chasing the Pain EFT technique for the physical symptoms you may experience.

Purpose and meaning come from times when you risk being vulnerable and authentic. Tapping will be an invaluable resource for helping you to WAKE UP the ‘morning after’ to the awesome power of being courageous and real. I know, I’ve been there.

Previous Post: « Personal and Professional Healing
Next Post: Fear Versus Intuition: Life in the Seattle: An Epicenter of COVID-19 in the U.S. »