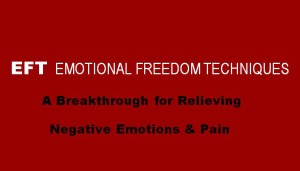 More and more I find that by addressing the ego reversals as soon as I feel the moment is right in an EFT session, the faster and quicker shifts happen.

Psychological reversals (PRs), ego reversals or secondary gains, as they are also known, are those hidden reasons why one would not want to let go of their problems and challenges. The most frequent way that I access these little gems is by asking the following questions:

These questions lead my clients to explore how they have identified themselves with their issues and show them what the benefits of remaining ill are. Once you explain that most of these are completely subconscious and therefore not a reason to assign guilt they are free to address each one clearly.

Another way psychological reversal presents itself is in the need some of us have in holding on to our negative emotions because we feel they serve us in some way. I call these Ego Reversals. Annie came to see me when she contracted mastitis. Mastitis is an infection in the breast of lactating women which appears as a painful lump and fever.

Many doctors suggest that women who push themselves too much too soon are susceptible to mastitis. I find that in our fragmented society self-care among new mothers is virtually nonexistent with the pressures and demands of taking care of a baby alone. Women lack the support in modern society whereas in cultures where the idea that it “takes a village” is the modus operandi. More often than not I find that the PRs for mastitis have to do with permission for self-care and rest. This is where I began with Annie.

Annie is the mother of 3 children under 5 and a successful professional with a demanding lifestyle and even more demanding drive to do everything correctly. It was not surprising that we discovered that she would only allow herself a break if she was ill. We tapped:

Even though I don’t really want to heal from the infection because I’d have to go back to a frenetic pace, I choose to find more constructive ways of slowing down…

The pain began to subside and the feverish ache went down but wasn’t completely gone. I then asked her what was happening in her life just before she came down with the infection. She knew immediately that the emotional reason had been an explosive argument she had had with her husband the day before. We worked on all the unresolved negative emotions associated with the disagreement including how these feelings where linked to identical situations that she had experienced with her own mother in childhood. Again the level of intensity dropped but the pain and lump were still lingering.

At this point I went into the Ego Reversal sby asking Annie what was she gaining by not completely forgiving and letting go of her anger towards her husband. Her answer was very telling, “I need my anger because he won’t listen to me if I don’t argue for my side with real intensity in my words.” We tapped:

Even though I can’t let go of my anger because it has served me so well in the past, I am open to the possibility that if I speak in a loving tone instead I am actually heard more clearly and I am more effective in my communication.

The effect of the session, and of the ego reversals, was immediate and the mastitis symptoms that would normally take days of antibiotics and bed rest to collapse, disappeared within an hour-long EFT session.

I continue to find the most amazing ways to apply the most incredible universal healing tool I have ever come across.